The issues that I confront through my work stem from personal experiences and observations; since an early age I was aware of my parent's difficulties as immigrants struggling with a new language and culture. Growing up I spent my summers in Nicaragua and the school year in San Francisco. These two very different environments created considerable confusion in so far as my understanding of where I belong in the world and of human interaction in general -- a sensibility that has extended into my artistic practice -- that investigates the divisive nature of capitalism and the social tools used to establish hegemony. My work seeks to invert common tools of social control to create dialogue, exchange critical perspectives, generate questions and ideally inspire subjective action.

In practice, the principle behind my work is twofold: to approach communication as a creative process and to investigate how economic realities formulate not only the world we live in, but more importantly the lives we lead.

I approach art as a social practice that seeks to establish dialogue in public spaces. Having been born of immigrant parents and grown up between Nicaragua and San Francisco, a strong awareness of inequality and discrimination was established at an early age. Themes such as immigration, discrimination, gentrification and the effects of monetization extend from highly subjective experiences and observations into works that tactfully engage others through populist metaphors while maintaining critical perspectives. Over the years, I have established a socially investigative creative practice that utilizes whatever media possible to present content in a manner that may generate interaction and discussion by others. 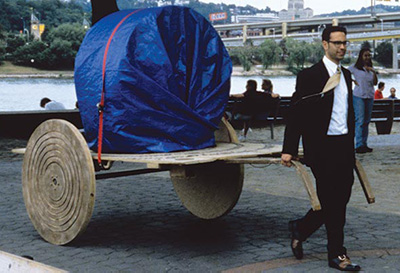 Throughout my career, I have been combining computer-generated art with sculptural vehicles to transcend the monitor and achieve social metaphors that investigate issues of globalization. Cargo Load (1999)is a hand built wooden cart with a short-wave radio hidden within the structure of the cart and speakers at each corner of the bed of the cart. The short-wave radio's station memory, programmed to stations from around the world, is linked to a motion sensor that is installed at the back of the cart. The viewers of the sculpture trigger the radio's memory to shuffle from one station to another. Cargo Load is activated by public performance to personify the concept that in an information society, the modern individual bears the heavy load of global awareness and information saturation. Wearing a business suit, I pull the cart along in a public environment; interested pedestrians are drawn to the odd tableau, which leads to a dialogue between interested spectators and myself - the cart becomes a public forum.

Cargo Load led to the ideation that aesthetic objects designed for public interaction might be used to create temporary public commons. I did, however, want to establish greater interactivity with the addition of narrative and moving images. A series of works involving installation, the web, and self-contained applications has lead to a diverse body of work utilizing illustration, video, animation, video games, radio broacasting, public intervention, web tools such as databases and APIs, as well as sculpture. The goal, of course, is for the work to be compelling through the combination of aesthetics and participation.